Founded in 1707, the Ministry of Magic is a secret ministry that governed the wizarding community in Britain for many years. The Ministry is governed by the Minister of Magic, who enjoys nearly autocratic powers, and the secretive Wizengamot, making the Ministry a police state on many occasions. After Voldemort's return in 1996, the Ministry eventually becomes a fascist government but when Harry Potter defeats the latter, the Ministry is reformed. 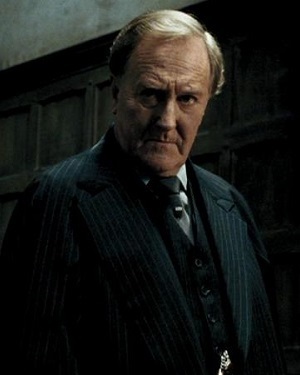 "Exactly, Fudge isn't in his right mind; it's been twisted and warped by fear."
— Remus Lupin on Fudge's deteriorating mental state

The Minister for Magic for most of the series, initially a rather affable figure with a keen fondness for Harry who continually asks Dumbledore for advice, he outs himself as a slanderous, incompetent coward when he refuses to believe that Voldemort has returned, instead opting to act as if nothing is wrong and making Harry and Dumbledore out to be insane. After Voldemort's return is revealed to all, the national public outrage that ensues caused him to be sacked from his position and replaced by Rufus Scrimgeour. 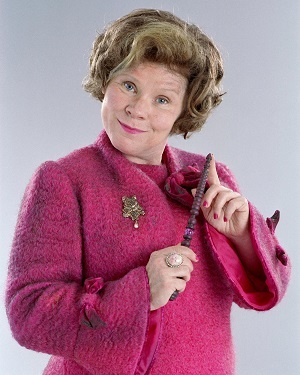 "I will have order!"

"As I told you, Mr. Potter, naughty children deserve to be punished."

A high-ranking Ministry functionary and perhaps the most universally despised character in the series, Umbridge affects the mannerisms of a kindly old aunt or grandmother, but they're only a thin veneer that covers authoritarian nastiness at its worst incarnate in one woman. Sent to Hogwarts by Cornelius Fudge to keep an eye on Dumbledore, Umbridge wasted no time in turning it into her own personal fiefdom, running the school as a sugar-coated dictator. She lost her post at the end of Order of the Phoenix but retained her Ministry job under Fudge's successors, Scrimgeour and Thicknesse. Umbridge is loyal only to the Ministry itself, no matter who runs it, and will gleefully uphold the status quo it lays down, no matter how horrible. The books make no mention of her final fate, but Rowling confirms that she was ultimately tried, convicted and sent to Azkaban. 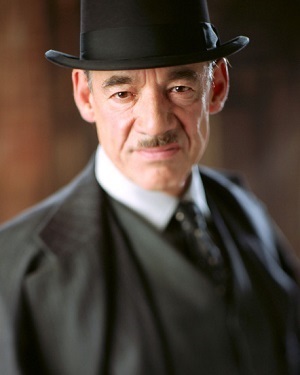 "And I trust you remember the many proofs I have given, over a long career, that I despise and detest the Dark Arts and those who practice them?"

The Head of the Department of International Magical Cooperation in the fourth book, and one of the organizers and judges of the Triwizard Tournament. In the First Wizarding War, he was Head of the Department of Magical Law Enforcement and one of the main forces opposing Voldemort. However, he fell from grace in the public eye after sentencing his own son to Azkaban on the charges of being a Death Eater. He was right in doing so, though, as Barty, Jr. really was one of Voldemort's supporters and ends up killing him after using him as a pawn through most of the fourth book. 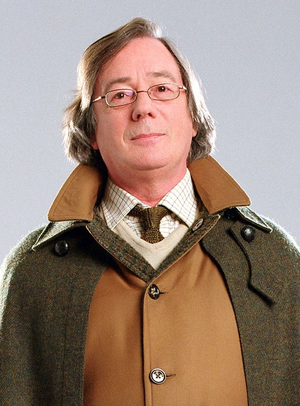 Cedric Diggory's father and a member of the Department for the Regulation and Control of Magical Creatures. He is extremely proud of his son, but appears to take it to an extreme by boasting about his achievements and giving Harry a hard time about it. 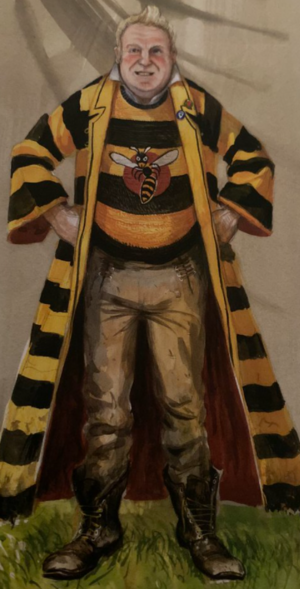 A former professional Quidditch player, and the head of the Department of Magical Games and Sports in the fourth book. He's also one of the organizers and judges of the Triwizard Tournament. A rather easygoing and jovial fellow, he's also a gambling addict who has bet on Harry to win the Triwizard Tournament, and tries to help him win so he can pay back gold he borrowed to cover his gambling debts. 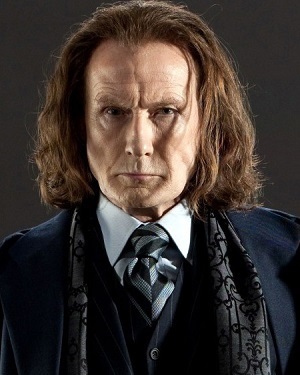 "These are dark times, there is no denying."

"I won't pretend to be your friend, Mr. Potter. But I'm not your enemy."

Cornelius Fudge's successor as Minister for Magic. Though he's unquestionably more competent than Fudge, he shares with him a healthy dose of distrust for Dumbledore and Harry, and much like Barty Crouch, is harsh in his methods of fighting Voldemort, such as imprisoning people on the mere suspicion of being Death Eaters. He is killed when Voldemort takes over the Ministry, but in his final moments, he refuses to tell Voldemort Harry's whereabouts. 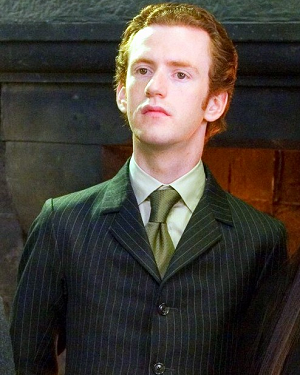 The Black Sheep of the Weasley family. At the start of the series, Percy is a pompous, ambitious prefect with No Sense of Humour. He's The Dutiful Son who thinks himself the "respectable" one in the family. His self-important manner made him the target of teasing from his younger siblings, making him a bit of a Butt-Monkey. Molly continuously failed to make the twins, Ron and Ginny view Percy as a role model, but not through lack of trying. Basically, his portrayal in the early books was that of an officious snob, but this was Played for Laughs and he was mostly a sympathetic character.

After finishing Hogwarts, he joined the Ministry of Magic, and this is when he Took a Level in Jerkass. When Voldemort returned, he chose to believe Fudge over Harry, leading him to become estranged from the rest of the family. Even after the Ministry acknowledged Voldemort was back, Percy continued to give his family the silent treatment and seemed to have become an unthinking cog in the Ministry's machine. At the end of Deathly Hallows, he pulls a Changed My Mind, Kid and returns to his family and to the side of good. 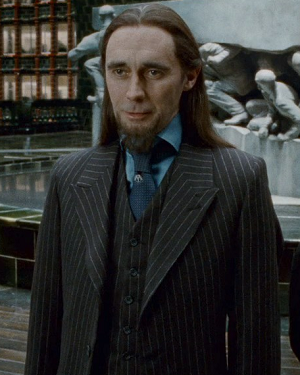 A Ministry official who is initially head of the Department of Magical Law Enforcement. He is put under the Imperius Curse by the Death Eaters and made Minister for Magic when Voldemort takes over the Ministry. He participates in the Battle of Hogwarts but is beaten by Percy Weasley, and later by Percy and Arthur. 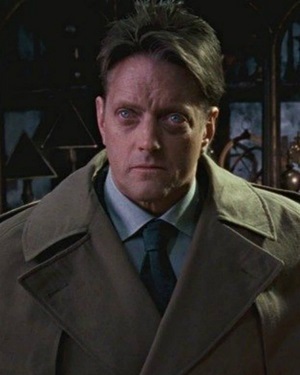 A very unfortunate member of the Auror office. He works under the regimes of Ministers Fudge, Scrimgeour and Thicknesse, resulting in various injuries to his persona on many assignments no matter whose side he's on. 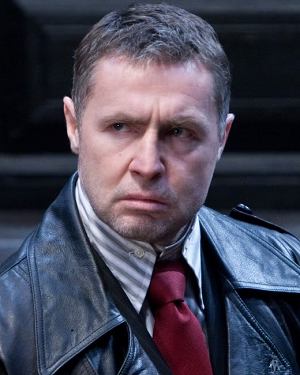 Albert Runcorn is a massive, deep-voiced man who works at the Ministry. Under Voldemort's dictatorship, he is charged with investigating and persecuting Muggle-born witches and wizards, which makes him a favourite of Umbridge, but an enemy of Arthur Weasley. He is known to have falsified wizards' family trees when he considers them a political enemy. When the Trio infiltrated the Ministry of Magic, Harry disguised himself as Runcorn. In this disguise, Harry finds that many of his allies are being tracked by the Ministry, and he later steals the locket of Slytherin from Umbridge. 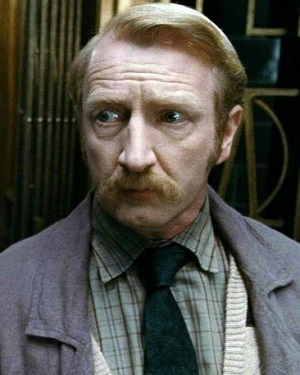 Reginald "Reg" Cattermole is a small man who works in Magical Maintenance as a janitor. His wife, Mary, is a Muggle-born witch who is subjected to a show trial on the day the Trio infiltrate the Ministry. Reg Cattermole is impersonated by Ron Weasley, and is unable to attend the trial, but later shows up and takes his family into hiding.

Mafalda Hopkirk is a short, middle-aged witch who works in the Improper Use of Magic Office. In that capacity, she sends Harry Potter notices on two occasions (Harry Potter and the Chamber of Secrets for Dobby's Hover Charm and Harry Potter and the Order of the Phoenix for a Patronus) warning him about the use of underage magic. By the time of Voldemort's dictatorship, she is still working at the Ministry, and is impersonated by Hermione during the infiltration. Umbridge conscripts her as a stenographer for the show trial against Mary Cattermole.

Appears in: Goblet of Fire

"Listen, I knew Bertha Jorkins. She was at Hogwarts when I was, a few years above your dad and me. And she was an idiot."
— Sirius Black

A Posthumous Character in Harry Potter and the Goblet of Fire. As a Hogwarts student, she was dimwitted and gossipy. She grew up to work for the Ministry of Magic. While working for Barty Crouch, she learned that his son was still alive and imprisoned in his home; Crouch placed a Memory Charm on her so powerful that it permanently damaged her memory, making her extremely forgetful. She was bounced hopelessly from department to department for years afterwards, ultimately coming to work for Ludo Bagman in the Department of Magical Games and Sports.

Shortly before the start of Goblet of Fire, Bertha Jorkins was captured by Wormtail and horribly tortured/interrogated by Voldemort. From her, Voldemort learned information crucial to his evil plot, including the revival of the Triwizard Tournament at Hogwarts. He even broke through the Memory Charm to learn the fate of Barty Crouch, Jr. This "damaged" her beyond repair and Voldemort subsequently killed her. Her death was the murder used to turn Nagini into a Horcrux.

Throughout the book, the disappearance of Bertha Jorkins is talked about. Ludo Bagman and much of the Ministry assumes there was no foul play involved and that she will turn up alive sooner or later. While the characters don't know what happened to her until the end of the book, the reader does as her fate is mentioned in the Villain Opening Scene.

She appears in the book when Harry sees her sixteen-year-old self in the Pensieve and when her spirit reappears during the graveyard battle. 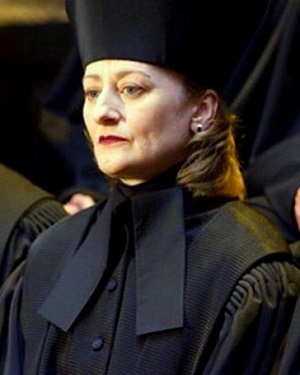 The celebrated Head of the Department of Magical Law Enforcement.

Madam Bones, having a seat on the Wizengamot, presided over the disciplinary hearing of Harry Potter. She was fair, unlike Cornelius Fudge, the prosecutor, and was astounded by Harry's ability to conjure a corporeal Patronus. She voted for the clearing of all of his charges, and Harry was allowed to leave. A year after, Madam Bones was killed by Lord Voldemort himself during the summer, though she put up a good fight.

Appears in: Order of the Phoenix

"Hogwarts is a school, not an outpost of Cornelius Fudge's office! This is a further disgusting attempt to discredit Albus Dumbledore!"

The governor of the Wizarding Examinations Authority that runs the O.W.L., N.E.W.T. and W.O.M.B.A.T. examinations.

A Ministry of Magic employee, Ogden worked in the Department of Magical Law Enforcement. He went to the Gaunt family to inform the Gaunts of Morfin's trial hearing arrangement for his criminal offence, before the events led to him fleeing the house of the Gaunt family and returning with reinforcements to arrest Morfin and his father, Marvolo. Dumbledore tracked Ogden down and convinced Ogden to give him his memory of the aforementioned encounter, which he then kept with him before showing it to Harry.

The Muggle-born head of the Goblin liaison office.