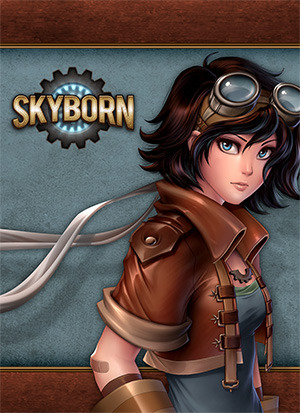 She's got skills and attitude.
Advertisement:

Skyborn is a 2012 western-made Eastern RPG created for PC with the RPG Maker engine. It can be bought

through Steam or Big Fish Games

Claret Spencer lives a simple and happy life working as the main mechanic in her family's repair shop, Spencer's Drydock and Repairs. But one day, her brother announces that he is selling up so he can travel the world, and has promised Claret's hand in marriage to the shop's new owner, professional rich fop Sullivan Chesterford.

This throws Claret out of her comfort zone and into the wider world: a place ruled by a race of Winged Humanoids known as the Skyborn, who use their magical powers to oppress humans and persecute the half-Skyborn "half-breeds". Yet a resistance movement led by the Zorro-esque "Red Spectre" is gathering strength in the shadows, and Claret soon ends up deep in the inevitable showdown.