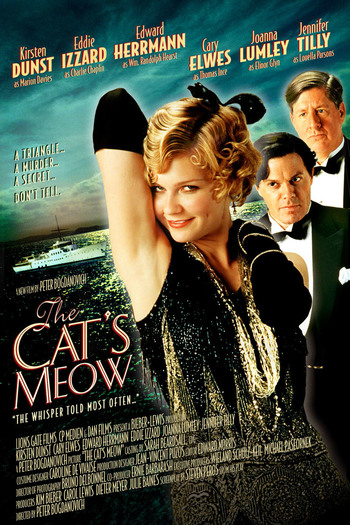 The Cat's Meow is a 2001 drama film directed by Peter Bogdanovich, starring Kirsten Dunst, Eddie Izzard, Edward Herrmann, Cary Elwes, Joanna Lumley, and Jennifer Tilly. The screenplay by Steven Peros is based on his play of the same title, which was inspired by the mysterious real-life death of film mogul Thomas H. Ince.

The film takes place aboard publisher William Randolph Hearst's yacht, on a weekend cruise celebrating Ince's 42nd birthday in November 1924. Among those in attendance are Hearst's longtime companion and film actress Marion Davies, fellow actor Charlie Chaplin, writer Elinor Glyn, columnist Louella Parsons and actress Margaret Livingston; the celebration, however, ends in an unusual death, which would go on to become subject of Hollywood folklore.

The Cat's Meow provides examples of the following tropes: