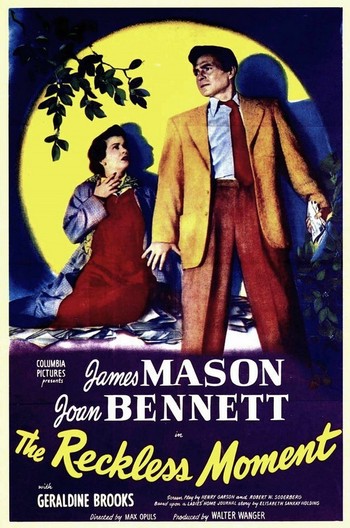 Lucia Harper (Bennett) goes to great lengths to warn her daughter, Bea (Geraldine Brooks), about the danger of dating an older and obviously sleazy man. Ignoring her mother's pleas, Bea goes to meet her boyfriend, Ted Darby (Shepperd Strudwick), but finds out that his scheming ways are true, so she hits him and runs away in shock.

The next morning, Lucia finds him dead on the beach, so in an act of rash reasoning, she decides to take her boat and dump his body.

Things aren't quite so simple, however. Darby owed money to some "business" men. Martin Donnelly (Mason) is one of them and blackmails Lucia.

This film is notable for being Max Ophuls' last American film. It is an adaptation of Elisabeth Sanxay Holding's 1947 novel The Blank Wall, which was re-adapted in 2001 as The Deep End, with Tilda Swinton as the housewife and Goran Višnjić as the blackmailer who falls in love with her.