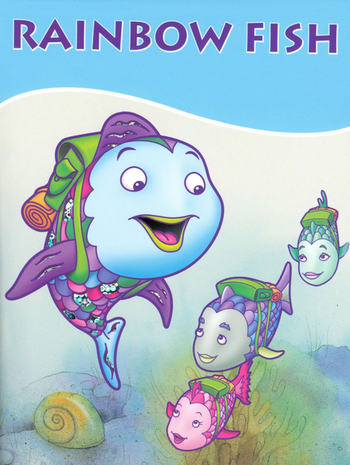 "Everybody knows, when they see that glow, it's Rainbow!"
— Part of the Title Theme Tune
Advertisement:

In January 2000, an Animated Adaptation of Swiss author Marcus Pfister's children's book The Rainbow Fish, was released. It was produced by Canada's Decode Entertainment (now part of WildBrain) and Sony Wonder Television (the kids and family entertainment label of Sony Pictures Home Entertainment) for Teletoon and HBO Family. It ran for 26 episodes over a single season.

The TV series takes the title character and the ocean setting and puts them into a new story, different from the children's books. In it, Rainbow Fish and his fellow sea creatures inhabit Neptune Bay and attend a school called "The School of Fish". Alongside his friends, another fish named Blue and a seahorse named Sea Filly, Rainbow Fish finds all kinds of adventures in the ocean, from exploring Shipwreck Park to spending time around his favorite hangout spots (usually Wanda the Octopus' diner) to avoiding such enemies as his bossy older sister Ruby and local bullies Chomper and Stingo.