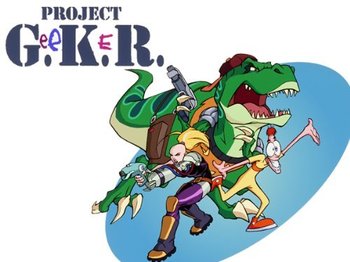 A twistedly brilliant Saturday morning cartoon by Doug TenNapel (the same man behind Earthworm Jim) and Doug Langdale (who ironically helped make the Earthworm Jim cartoon, despite TenNapel's opposition to it; he would later go on to create Disney's The Weekenders and Dave the Barbarian), Project G.e.e.K.e.R. ran for thirteen episodes in the mid-90's on CBS. However it was doomed from the beginning because the FCC's new educational programming requirements came into effect in January 1997, just as its first season run was ending, and CBS couldn't see it meeting E/I guidelines well enough for a second season.

In an ambiguously future time, Moloch Industries and its CEO, Mister Moloch owns most of the solar system, yet even that is not enough. In order to gain total power, Moloch initiated Project GKR (Geno-Kinetic Research). The aim of Project GKR was to create the perfect corporate warrior; an artificial human with complete control over his molecular structure, whom Moloch could use to crush all who opposed him.

All that was needed was the loyalty program. But then Project GKR was stolen by an Action Girl named Lady Macbeth and Noah, her intelligent Tyrannosaurus pal. Due to the loyalty program having all the intelligence, they end up saddled with Geeker, a Cloudcuckoolander to the extreme who has no real idea just how powerful he really is.

The series' entire run was on Hulu and iTunes at one time, but has since disappeared.