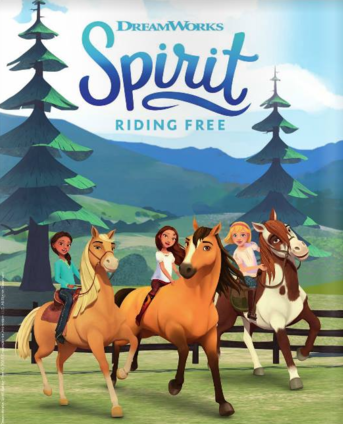 Spirit: Riding Free is a 2017 animated series by DreamWorks Animation based on the 2002 film Spirit: Stallion of the Cimarron.
Advertisement:

When city-turned-country girl Fortuna "Lucky" Prescott meets a wild mustang named Spirit, she feels an instant connection to the untamable horse. A courageous and natural-born leader, Lucky navigates this new world with her two new best friends, Pru Granger and Abigail Stone—with their horses Chica Linda and Boomerang—by her side. The trio embark on thrilling adventures, find genuine friendship, and discover what it means to be free!

In 2021, the series gained a major motion film adaption adapting events from the first season titled Spirit Untamed, It should be noted that it's the first Dreamworks Netflix show to get one.

Lucky tries to get Snips' hair snipped, and challenges him to a Showdown at High Noon

Lucky tries to get Snips' hair snipped, and challenges him to a Showdown at High Noon