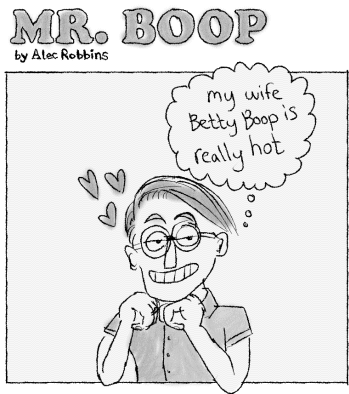 "new daily comic strip i invented about what it’s like being married to Betty Boop"
— Alec Robbins
Advertisement:

A Life Embellished webcomic about the titular Alec Boop (nee Robbins) and his life being married to Betty Boop. Claimed to be based on Alec Robbins' real life, and posted on his twitter account

, the webcomic features Alec meeting (and usually having sex with) characters from various media, including Family Guy, The Sopranos and even Homestuck.

Has a spin-off flash game, Mr. Boop and the Curse of the Dinner Party

; tropes applying to this game are included in the Mr. Boop section. There is also a pseudo-sequel comic available on the webpage, Mr. Group, in which Alec attempts to trap a group of his online followers (and himself) in a Deadly Game. Tropes for Mr. Group are listed separately at the bottom of this page.