Webcomic / The Monster Under the Bed 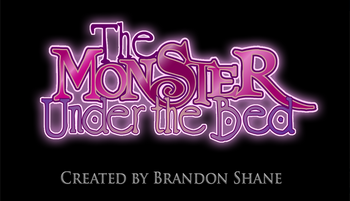 Tim is a perfectly ordinary 18-year-old boy, who has nothing special going for him. At least, that's what you would think if you didn't know about his nightly visits from his girlfriend, who happens to be a dark-skinned demon from another dimension, and that the portal she uses to get to Earth just happens to be located right under Tim's bed. What seems like a fun, romantic romp between human and monster turns into a story of drama and intrigue, both in the monster world and human world.

The Monster Under the Bed

is a webcomic by Brandon Shane, based on his original story of the same name. This webcomic is NSFW, so there is a link to a safe page provided. Updates Sundays.