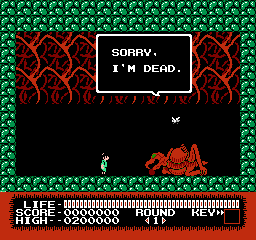 Monster Party is a very bizarre game, but some of the bizarreness can be a good source of laughs.