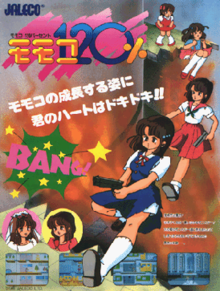 Momoko 120% is an Arcade Game released by Jaleco in 1986. Released only in Japan, this is a Platform Game / Run-and-Gun in which the player controls a girl, Momoko, as she tries to escape her burning school building. Each stage of the game has escalators, trampolines, and secret passages to help Momoko reach the blimp waiting above the roof.

The game was originally intended to be a Licensed Game called Urusei Yatsura: Lum no Wedding Bell, but the arcade version was released as Momoko 120% due to licensing issues. After the licensing issues were resolved, the game came out on Nintendo Entertainment System as originally intended. The characters were changed, but the gameplay remained intact.

Momoko herself would later appear as a playable character in Game Tengoku.