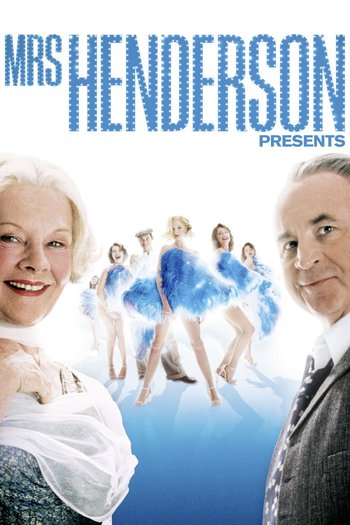 The show must go on but the clothes must come off.
— Tagline
Advertisement:

The film tells the true story of the Windmill Theatre in London. Eccentric 70-year-old widow and socialite Mrs. Laura Henderson (Dench), buys the theatre and decides to introduce nude shows in it, a move that causes much morality turmoil and Executive Meddling. She finds a loophole in that the nude performers have to remain immobile, so the performances can be considered art, the equivalent of nude works of art in museums. The theatre gains much success, especially when World War II breaks out and London gets bombed during the Blitz. She does this alongside Vivian Van Damm (Hoskins), a veteran theatre manager and Bertie (Young), a singer.

Dame Judi Dench was nominated for Best Actress at the Oscars that year, and Sandy Powell likewise for Best Costume Design. In 2015, a musical adaptation premiered on the West End. This one adds in male nudity for the sake of equality.