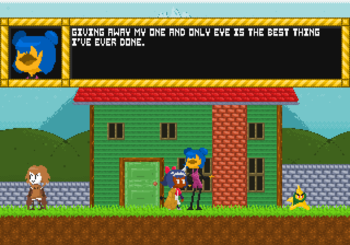 Khimera: Destroy all Monster Girls is an action platformer made by indie studio Suits & Sandals

and made available for free on Steam on April 15, 2016 after being proposed on Greenlight. The story is about the thriving island of Morgana, set somewhere in the Mediterranean, home to a community of various monsters and creatures. One day the isle is attacked and plundered by a pirate crew known as Sea Spiders. The peaceful community that lives there is unable to defend itself from the menace, until a professor activates his latest creation: Chelshia, a synthetic chimera. Not only is she a mix of human, golem, harpy and oni, thanks to her creator she can also use the DNA of her defeated foes to gain new abilities.

Khimera takes inspiration from the platformer classics of yesterday and today, such as the Mega Man series and the Shantae series, as well as the 8 and 16-bit gaming era, all coated in a cute and humorous package. The game's page on Steam