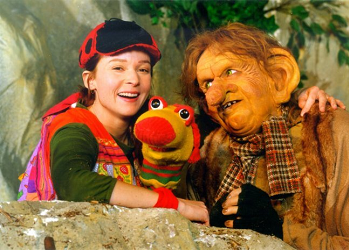 Ik Mik Loreland was an Edutainment Show that ran for two seasons in 1994 in The Netherlands. It was developed to be accompanying a reading method coined Veilig leren lezen, which means "learning to read safely", and ended up traumatizing pretty much every Dutch child born between 1985 and 1995. This was especially due to the Big Bad Karbonkel, who was Nightmare Fuel to most viewers, which were aged 5-7 at that time.

The story starts in the fictional land of Loria. Everyone in Loria is obsessed with anything having to do with reading and writing, to the point where their entire lives revolve around it. In a cave nearby, there lives Karbonkel, an ill-tempered troll like creature who is illiterate, but desperately wants to learn reading and writing, so he can write a story about his species, the Karbonkels. One day, Mik, the protagonist, visits Karbonkel's cave and tries to teach him to read. But Karbonkel, impatient as he is, wants to instantly learn it. When Mik explains learning to read takes time, Karbonkel becomes very angry and uses his magic powers to turn the entire country of Loria illiterate out of spite, by removing all letters from the country. This turns Loria into the titular Loreland. To restore literacy in Loria, Mik sets out on a quest to reacquire all letters. Mik's journy brings her to strange lands, with equally strange creatures, who are either helpful, harmful or just weird. During her travels, Karbonkel follows her, trying to make her quest fail.

Word of God says it wasn't

inspired by Twin Peaks (Though the bad guy Karbonkel has several parallels with Killer BOB).

The entire series can be viewed Here