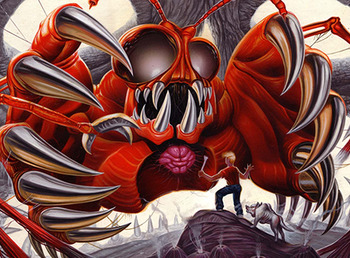 "I'm not really sure where 'here' is, to tell you the truth."
— The Hero
Advertisement:

A 1995 Action RPG modeled on the smash hit Secret of Mana. Despite appearances to the contrary, Evermore is not a World of Mana entry, but was made from whole cloth by Square USA (now part of Square Enix); it's also one of few games to be developed entirely in the U.S. by Square. Mainly remembered for its ambient soundtrack by up-and-coming composer Jeremy Soule, who went on to provide soundtracks for such classics as Dungeon Siege, The Elder Scrolls (from Morrowind onward), Guild Wars, and Total Annihilation.

The game stars a B-movie-loving boy who stumbles upon an abandoned mansion on the outskirts of Podunk, U.S.A. After a mishap with a mysterious device, the boy and his canine companion get warped to Evermore, an artificial world which resembles a mash-up of various epochs in Earth history: 1 Million B.C., Sword and Sandal, The Middle Ages, and finally Tomorrowland. He discovers four other people who are also trapped, the result of a bungled experiment 30 years ago. His goal becomes to explore this strange world and find a way to get everyone back to Podunk.

The plot isn't as complex as it sounds, and the game is full of parodies of the genre, especially the path-of-least-resistance economic tropes: There's a whole segment with the boy hocking items and haggling with merchants. Likewise, spending time in the boy's company is pretty entertaining, with the boy constantly comparing his predicaments to various (awful) movies, and his dog shapeshifting into various forms (wolf, greyhound, poodle, robot) depending on which locale they're in. It's strictly 1-player, unlike Secret, though a 2-player hack for it exists.

Compared to Secret and other Square titles, the game itself is rather short. It's also linear, with no side quests, loads of Back Tracking, and only one branching path (choosing whether to tackle the Great Pyramid or Hall of Collosia first). The biggest divergence from Secret is the Vancian Magic system, known here as Alchemy. Throughout the game, you'll be able to find or buy ingredients for spells, whether offensive or defensive; these range from the commonplace Oil, Water, Wax, Limestone, and Root to exotic ones like Ethanol, Brimstone, Dry Ice, and Meteorite. You learn new formulas by seeking out alchemists (some of whom can be tough to find) and assembling the necessary parts. Use a formula enough times, and it will level up in effectiveness, similar to Secret.

A long-dead post in the Secret of Evermore GameFAQs forum featured an extended discussion with one of the game's programmers who happened to stumble upon the conversation. Topics covered before the thread died ranged from what the programmers did after work, to an explanation of what the Gourd does (it doesn't do anything, incidentally), and some personal anecdotes regarding the design process itself. For instance, they used Randi from Secret as a placeholder sprite for the boy during the prototyping phase.

Secret of Evermore provides examples of: