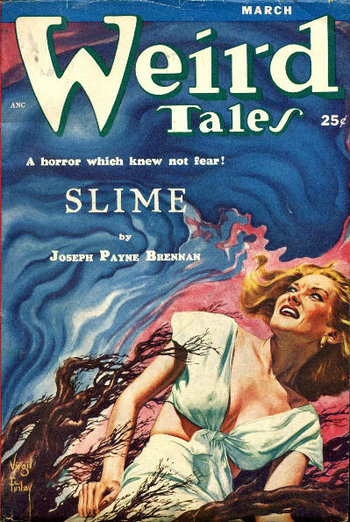 Slime is a short horror novelette written by Joseph Payne Brennan and originally published in the March 1953 issue of Weird Tales. It went on to inspire many Blob Monster stories and films like The Blob, Stephen King's The Raft, The Clone, Dean R. Koontz's Phantoms and many others.

An undersea seismic disturbance sends something fetid, slimy and alive to the surface of the sea and into Wharton's Swamp, a coastal bog near the town of Clinton Center. Homeless man Henry Hossing, who goes into the swamp to drink the whiskey he bought with a $10 bill he found, vanishes. The next morning, Giles Gowse, a farmer who lives right next to Wharton's Swamp comes into town complaining that his cow Sarey has gone missing and his barn interior is all slimy and stinks like dead fish.

Everyone laughs at him. Wharton's Swamp has a reputation, all right, but so does he, as being a bit on the kooky side. On his way home he passes his neighbor, fellow farmer Rupert Barnaby and his dog Jibbe. Despite Old Man Gowse's warnings, as the sun goes down, Barnaby, a rational man who considers the superstitions about the bog to be gobbledygook, wants to bag himself a raccoon, so he heads into the swamp with his rifle, accompanied by Jibbe. And then comes a slithering noise. He's about to wish he had been superstitious after all...

It's been published in many anthology collections (most memorably in Nine Horrors and a Dream and The Shapes of Midnight with an introduction by Stephen King), and a very well-produced three-part audio version read by Edward E. French can be found in three parts (here

) and was even once ripped off wholesale for the first half of Victor Norwood's novel Night of the Black Horror.

Not to be confused with the 1988 novel of the same name by William Essex.