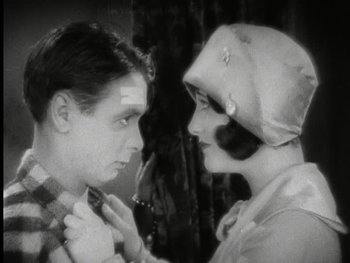 The Boob is a 1926 film directed by William A. Wellman.

Peter is the boob in question, a hick from the country who is upset that the girl he likes, Amy, is dating a city slicker named Harry Benson. Harry is suspiciously well-dressed and drives a fancy car; Peter suspects that he is a bootlegger.

Peter gets the bright idea to dress up as a cowboy to impress Amy. When this fails completely he decides to be a detective and prove that Harry is a bootlegger. Peter tracks Amy and Harry to a local hotspot, "The Booklovers' Club", and finds out that it's a speakeasy and Harry is a bootlegger. There he meets Jane, a Prohibition agent, who mistakes him for a fellow agent and enlists him in getting the bootleggers.

The Boob was one of the first credits for William A. Wellman, who soon hit the big time when he directed the first film to win an Oscar for Best Picture, Wings. Jane the Prohibition agent was played by an up-and-coming young MGM actress named Joan Crawford, who also was soon to hit the big time.