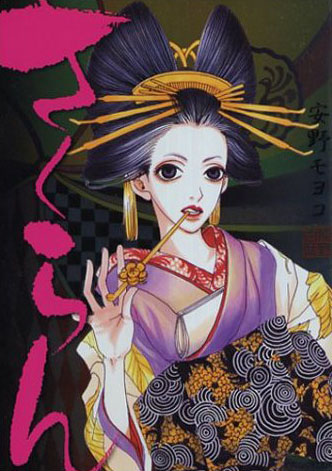 Sakuran (or as it is known in the US, Sakuran: Blossoms Wild) is a seinen manga by Moyoco Anno, which was serialized from 2001 to 2003 in Evening magazine and published as a single volume.
Advertisement:

It tells the story of a spirited and strong-willed young girl sold into a brothel after the death of her parents. Throughout the work the name of the girl changes: as a maid, she's Tomeki; as a shinzo (a courtesan in training) her name is O-Rin; as a Zashiki-Mochi (a rank on her brothel) her name changes to Kiyoha; finally, as an Oiran (the highest level of courtesan), her name is Higurashi. The story details her journey through her many attempts to run away, her doomed first love, and her struggle to remain true to herself and not let herself get broken by the difficult life of a courtesan.

A live-action film adaptation was released in 2007, with a soundtrack by Shiina Ringo and Saito Neko.