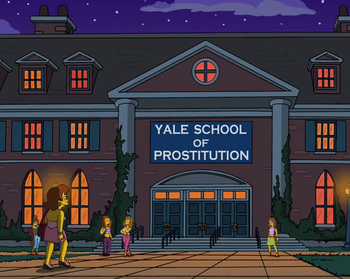 You can get a degree in anything these days.
Advertisement:

A school where one learns to... well, be a member of The Oldest Profession, usually as a high-class prostitute. Rather than what you might first imagine—Double Pole-Dancing and bondage—the classes are more likely to be on seduction, etiquette and entertaining. The women are trained to serve wealthy, sophisticated clients who want more than just a good time between the sheets. By the time she graduates, she'll be equally confident ordering wine at a fine restaurant, attending an opera soiree, or lounging in a silk negligee.

Related to Band of Brothels.

Despite the title, this trope is completely unrelated to Ohtori Academy.