Caught in the Bad Part of Town 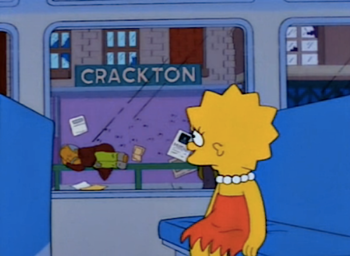 [Siren Wailing] "Crackton? That doesn't sound right."
"Bad neighborhood, Snake! You don't want to be walking from the Bowery to 42nd Street at night. I've been driving a cab here for 30 years and I'm telling you: you don't walk around here at night! Yes, sir! Those Crazies'll kill you and strip you in ten seconds flat!"
—Cabbie, Escape from New York
Advertisement:

In many cities, there is an acknowledged "bad part of town": a place where outsiders just don't go. This trope is what happens when characters who don't belong find themselves in this bad part of town.

This trope can play out in a number of different ways. In more hopeful works, the characters could discover that not everyone in The City Narrows is a bad person and learn a lesson about judging by appearances. In other works, the characters will face a nail biting adventure as they find their way out and back to more familiar ground. In Crime and Punishment Series, they might just end up dead.

In a military / warfare context, this can be lethally serious. As in the inhabitants of this side of town / this side of the front lines want to kill the character. Depending on the depiction, this can sometimes lead to Unfortunate Implications of racism or classism, particulary if it's a dynamic where a rich/white character finds themselve endangered in a low-income or minority-heavy neighborhood.