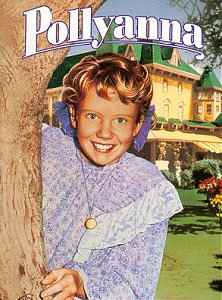 "We looked for the good in them... and we found it, didn't we?"
— Reverend Ford
Advertisement:

Pollyanna is a 1960 Disney live-action movie, based on the novel of the same name. Written and directed by David Swift, it stars Hayley Mills as the heartwarming orphan Pollyanna Whittier. Jane Wyman stars as Aunt Polly, with Agnes Moorehead as Mrs. Snow and Karl Malden as Reverend Ford. The film was the last performance of Adolphe Menjou, who appears as Mr. Pendergast.

The film makes a few alterations and expansions to the novel. Aunt Polly for example is now even more of an antagonist - portrayed as a matriarch who controls the entire town (which is appropriately named Harrington Falls here) down to what the reverend says in his sermons every Sunday. The maid Nancy likewise now has a sweetheart called George that Polly disapproves of - and not snitching on them is what prompts Nancy to become Pollyanna's friend. An additional narrative change involves the townspeople rejecting Aunt Polly's false charity and organising a town bazaar to raise funds themselves. New characters are added - such as a sour maid Angelica and a cook Tilly - and others have their roles expanded like Jimmy Bean and Mr Pendergast (a renamed Mr Pendleton).

Despite being viewed as a financial disappointment, Pollyanna was a hit for the Disney studio, and turned Hayley Mills into one of the biggest child stars of the early 60s; she became the last winner of the Academy Juvenile Award

for her performance. Walt Disney apparently loved the film so much, he refused to let any scenes from it be cut.