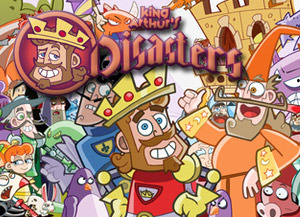 In a minute or two, something is going to go very wrong, possibly bursting into flames.
Advertisement:

King Arthur's Disasters (2005-2006) is a British cartoon about King Arthur but having very little to do with actual Arthurian Legend, it features the voices of Rik "The Young Ones" Mayall, Matt "Little Britain" Lucas, Phil "Saturday Night Live" Cornwell, and Morwenna "Reeves and Mortimer" Banks. It airs on children's channel CITV and Nickelodeon UK.

King Arthur loves Princess Guinevere, unfortunately she's a Rich Bitch and he's a complete moron (in fact no one in this show is very bright). His attempts to woo her (usually by being sent on some deadly Fetch Quest by her) are aided by Merlin, a nervous wizard who tries in vain to stop Arthur from going through with these promises. Arthur is opposed by two wayward Knights, Lancelot and Martyn and eternally cheerful but dim Robin Hood and his ever suffering Merry Men and Women (well, Woman).

Of course even if Arthur gets the item Guinevere requested she never returns his affections. The show is Strictly Formula but the gags are good enough to maintain it anyway.