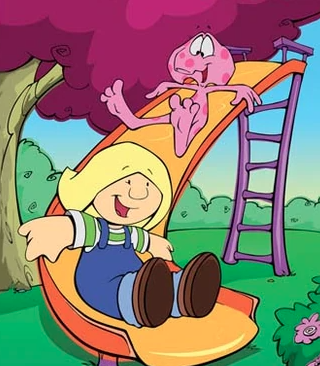 "Far away out past the moon, came a little pink friend all alone...
There's a house with a girl inside, such a nice end to his ride,
Katie sees a friend in need, Orbie!"
— Opening theme
Advertisement:

Katie and Orbie is a Canadian slice-of-life and (not exactly) animated series for preschoolers, based on a series of books created by famed cartoonist Ben Wicks and his daughter Susan, which were focused on protecting the environment by doing age-appropriate tasks such as saving water and recycling. The series aired on Family Channel and reruns were also seen on the local Playhouse Disney/Disney Junior channel, while also being seen in the United States, the United Kingdom, Australia, France, Spain and Latin America, among others.

The backstory is about a small, polka-dotted extraterrestrial that has been sent away from his planet because pollution has made it a place where life can no longer be sustained. The little alien lands on the backyard of a friendly five-year-old girl, who immediately befriends him and gets adopted by her family. Together they have adventures and discoveries alongside their other human friends. The characters do not speak, and all the action is described by an off-screen narrator.

The series had two different runs: one from 1994 to 1996, and another from 2001 to 2002, producing a total of 78 half-hour episodes in six seasons. Reruns still aired in Canada until 2012, while other countries stopped airing it by the Turn of the Millennium (except for Latin America, where it did not even premiere until 2008).