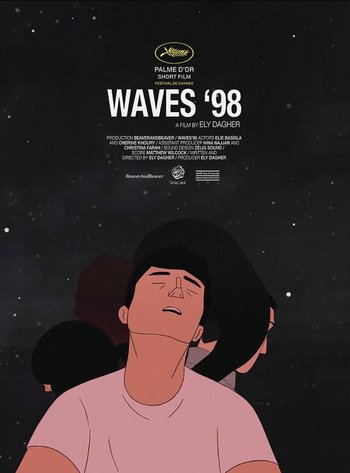 A boy named Omar in his late teens is living in Beirut in 1998. He seems intensely bored with his uneventful existence of going to high school and then coming back home to the apartment he shares with a father and an older brother. He's given to sitting on the roof of the apartment building and staring out over the Beirut cityscape, looking at nothing. Most of the little dialogue in the short is Omar muttering the words "I'm tired of hearing the same story over and over again" and "It feels like everything is stuck."

One day Omar sees a strange glowing light across town. He rides across the city on his moped, only to discover...a gigantic golden elephant. "Gigantic" as in gigantic, an elephant that is taller than most of the buildings in the city. Omar enters the enormous golden elephant along with two other young men and an attractive young woman named Noura. He then goes on a strange, mystical flight.

There's also a floating head, of a man who looks to be in his forties.