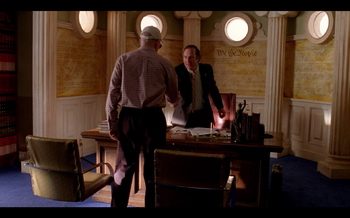 No, this isn't the show. Yes, this is where the seed was planted. And yes, the show eventually had its own episode called "Breaking Bad" if you were looking for that. Anyway...

Badger conducts business on a bus stop bench when he is approached by a lankey, nerdy-looking man looking to buy meth. Badger suspects this prospective customer may be an undercover cop and makes fun of him, but when he seems to have turned him off, asks for him to come back, amenable to any suggestion that he is not a cop. The young man tells Badger that, according to the law, an undercover police officer must confirm he is such if asked directly. After denying that he is a cop, he buys meth from Badger.

Unfortunately for Badger, his initial suspicions were spot-on; his customer was, in fact, an undercover cop, who immediately arrests Badger.

Having had sex the previous night, Jesse and Jane lay together in his apartment as a late night advertisement for Saul Goodman's legal services plays on the TV. However, Jane abruptly leaps up when he suggests they smoke marijuana, explaining that she is a recovering drug addict who has been clean for eighteen months.

Marie tells Walt that she's worried about Hank, who has holed himself up in his bedroom since the Tortuga incident. When Walt visits him, Hank admits that he was taken off guard by the war-like atmosphere in El Paso, but says that seeing a shrink about it would kill his career. Walt suggests that Hank could talk to him about it, explaining how his cancer diagnosis helped him conquer his fear of everyday life.

At Jesse's apartment, he and Walt split up $90,000. Walt, expecting more, asks Jesse about the missing money. Jesse explains that Badger hasn't put in his full amount. When Jesse calls Combo to ask for Badger's whereabouts, he learns that his friends were too intimidated to inform Jesse of Badger's arrest.

Pulling himself together, Hank returns to the DEA field office in Albuquerque and is greeted with applause by his colleagues. Gomez informs Hank that Badger was picked up with the blue meth that Hank is so interested in. The two decide to head to the police station to join the APD in questioning Badger.

Detective Getz, the undercover cop who busted Badger, interrogates Badger, while Badger is peeved because he still believes that the cop is trampling the Constitution he hasn't said anything revealing... yet. He might be just about to, however, when Saul Goodman, a disreputable, ambulance-chasing, morally-unscrupulous criminal attorney and local celebrity comes into the room and chases Getz off. After a brief mix-up caused by him thinking Badger is being held on a public masturbation charge, Saul says he should be able to get Badger out of trouble, just so long as he uses his phone call to call up someone capable of meeting Saul's fee of $4,650. Saul's interest in the case only increases when he encounters Hank and Gomez in the hallway, talking about Badger. Knowing that there's no way two DEA agents would be involved with a street case involving a nobody like Badger unless there was something big going on (and thus, a chance for Badger to make a deal) Saul starts talking business with the agents.

Walt loses a coin toss to determine who will go into Saul's office and pay his retainer fee. So he goes in incognito, sporting a hat and sunglasses to conceal his identity, and claiming to be Badger's uncle. Saul explains that Badger may be in the clear; all he has to do is answer the DEA's questions and he would likely be released. Walt, however, doesn't want Badger talking to the DEA, knowing that it would lead to his own arrest. He begs Saul to do everything he can to keep Badger from talking to the DEA, but Saul explains that it's the only way he can avoid jail time. Desperate, Walt offers Saul a bribe of ten thousand dollars. Surprisingly, Saul turns down the offer.

That evening, Walt and Jesse, wearing ski masks, kidnap Saul and drive him out to the desert, where a shallow grave was dug. Saul thinks they're with the cartel and panics, frantically begging for his life in both English and Spanish until Jesse tells him they're not part of the cartel, which causes Saul to finally relax. Holding Saul at gunpoint, Jesse makes his ultimatum; Saul must do everything in his power to have Badger cleared of his charges and released, but he is not to talk to the DEA under any circumstances. Saul suggests killing Badger to silence him, an option which Walt seems to seriously consider, but Jesse adamantly refuses to kill his friend.

Walt then begins to suffer from a coughing fit, which Saul recognizes from his earlier visit, causing him to deduce his identity as Badger's "uncle". After having Walt and Jesse slip dollar bills into his pocket to ostensibly protect them under attorney-client privilege, Saul explains that someone has to go to jail. It's just a matter of who...

Based on the description of Heisenberg that Badger gives to Hank (a middle-aged bald man), Saul finds the perfect man to take the fall: James Kilkelly, also known as "Jimmy In-n-Out". Kilkelly has made a career out of going to prison for the right price, having preferred life on the inside to freedom. All he needs is $80,000, in addition to a pound of Walt's meth.

Hank and the DEA set up a sting operation to catch Heisenberg, with Badger agreeing to get meth from the fake Heisenberg in exchange for his freedom pending Heisenberg's arrest. Badger arrives on time, but Jimmy is late. Eventually a different bald man sits next to Badger, who doesn't know this isn't Jimmy. When the real Jimmy sits down on a nearby bench, Badger is busy soliciting the wrong man, trying to make the deal. Walt speeds around the block to the bench and makes Jesse intervene. After Jesse exits the car, Walt zips over to the stakeout vehicle to talk to Hank, thereby blocking their view and buying time for Jesse to redirect Badger. Jesse directs Badger to the correct bench and Jimmy's arrest goes down as planned. Hank, however, has his doubts that Kilkelly could possibly be Heisenberg...

Later, Jane drops by Jesse's apartment and they make love.

While Walt is grading tests and cleaning up his classroom, Saul pays a surprise visit; he chastises Walt on being so easy to find, stating that if his private investigator could easily find him, the DEA could too. Walt initially suspects that Saul had come to blackmail him, but Saul clarifies that he wants to help Walt. Walt has a product that is very valuable, but he lacks connections and criminal know-how, something Saul could provide in exchange for a nominal fee. As he leaves, he advises Walt that if he wants to continue expanding his empire, he'd "Better Call Saul!"

"If you want to make more money, and keep the money that you make, Better Call Saul!"