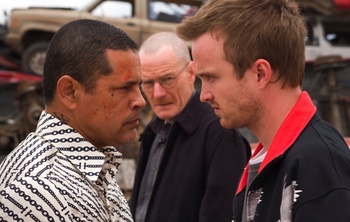 "You're done."
"Right now, Tuco's thinking, 'Yeah, hey, they cook good meth, but can I trust them?' What happens when he decides 'no'?"
— Jesse Pinkman
Advertisement:

Walt completes his meth sale with Tuco. Before the two part ways, however, Tuco gets into an argument with his underling, No-Doze, and beats him bloodily. Tuco departs with No-Doze's unconscious body and Gonzo, but returns when No-Doze stops breathing. Tuco demands Walt and Jesse try to save him with CPR (which Walt claims won't work), but No-Doze dies where he lays. After taking his frustrations out on No-Doze's lifeless corpse, Tuco orders Gonzo to dispose of the body.

Walt returns home, and is seen mindlessly flicking through channels the following morning by Skyler. Stressed out, Walt tries to initiate sex with Skyler, but she demands he stop, and tells him that he must contain himself when in distress.

That night, Walt and Jesse meet to discuss how to deal with Tuco, whom they believe wants to kill them since they were witness to No-Doze's murder. Jesse, paranoid that Tuco is having him surveilled, has bought a gun, which he intends to use to take out Tuco before he can take Jesse out.

As Skyler and Marie's relationship becomes rocky over Marie's shoplifting and her subsequent refusal to discuss it, Hank and Gomez watch grainy surveillance footage of two thieves breaking into a chemical plant to steal methylamine, supposedly to make old-fashioned biker crank. Little did Hank know, one of the masked thieves in the grainy video was none other than his brother-in-law...

When Walt drives home at night, he finds that a suspicious van is parked near his house. He meets with Jesse and asks if Tuco knows anything about his identity. Jesse denies revealing anything to Tuco. Walt concocts an alternate plan to simply shooting Tuco: processing castor beans into a deadly poison called ricin, and cooking a batch of meth laced with ricin to give to Tuco. The symptoms of ricin poisoning are similar to a flu, and the toxin is untraceable by conventional means, allowing them to kill Tuco and not be suspected.

While he's making the ricin, Hank calls Walt from a crime scene. Hank had discovered the body of Gonzo - who had returned to properly dispose of No-Doze's body after hiding it under a stack of cars, but wound up getting his arm crushed by a piece of debris from the junkyard and bleeding out. Hank assumes at first that Tuco had Gonzo killed, causing Walt and Jesse to believe that Tuco is tying up loose ends and killing everyone who knew about No-Doze's murder. Walt tells Jesse to run off while he stays to protect his family.

That evening, Walt returns home. Skyler asks where he has been so late at night, but Walt is as cagey as ever. He gets a call as Skyler questions him, and steps outside to find Jesse parked in front of his house.

To his horror, Tuco is hiding in the backseat. He orders Walt, at gunpoint, to get in, and forces Jesse to drive them away...