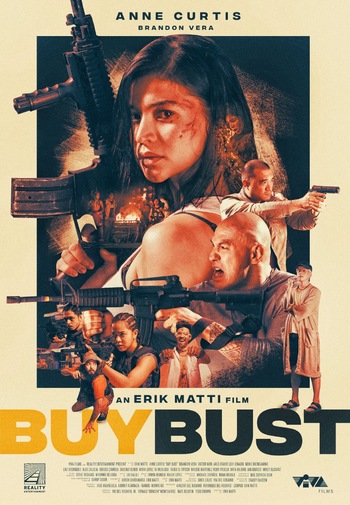 BuyBust is a 2018 Filipino action-thriller film co-written and directed by Erik Matti.

Nina Manigan (Anne Curtis) is a decent, honorable cop who joins a PDEA (Philippine Drug Enforcement Agency) squad after an operation gone wrong kills everyone in her old squad except herself, leading her to be labeled unfairly as a traitor, or "Hudas" (Judas). Shortly after joining the new squad, the entire team, as well as another squad led by Dirty Cop Rudy dela Cruz (Lao Rodriguez), goes on a mission to take out notorious drug lord Biggie Chen (Arjo Atayde) in a decrepit slum area called Gracia ni Maria ("Mary's Grace"), only for the mission to go horribly wrong almost from the get-go, as Chen's numerous thugs and a plethora of angry villagers, among other factors, make it almost impossible for the squads to make it out alive.

Some critics have seen the movie as being supportive of the drug war conducted under President Rodrigo Duterte.