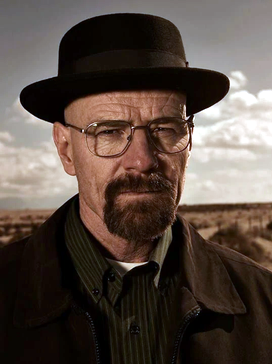 "A guy opens his door and gets shot, you think that of me? No. I am the one who knocks!"

"My wife is seven months pregnant with a baby we didn't intend. My fifteen-year old son has cerebral palsy. I am an extremely overqualified high school chemistry teacher. When I can work, I make $43,700 per year. I have watched all of my colleagues and friends surpass me in every way imaginable. And within eighteen months, I will be dead."
Advertisement:

Walter White is an highly-intelligent high school chemistry teacher living in Albuquerque, New Mexico. When he is diagnosed with terminal lung cancer on his fiftieth birthday, Walt begins to worry what will happen to his family with his death now imminent and the treatments to keep him alive being very expensive. After learning about how much money lies in the drug trade, Walt partners up with an old student of his who has become a drug dealer, Jesse Pinkman, to manufacture and sell crystal meth. Due to Walt's skill with chemistry and dedication to perfection, the meth he cooks is astonishingly pure and potent - and due to an alternative chemical process he uses to create it, it has a distinct blue coloration. "Blue Sky" catches the attention of dealers who want a piece of such high-quality product, and also the DEA who want to find out where it's coming from.

Walt adopts the moniker "Heisenberg" as an alias as he immerses himself in the drug trade and works his way up to the international level, becoming a famous and feared drug kingpin who leaves a trail of money, bodies, and meth behind him.

Now has a self demonstrating page.