Webcomic / Paper Mario And The Ever Clear Night 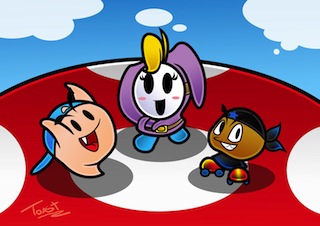 Pose as a team 'cause shit just got real.
When the hearts of the stars are shining bright,
Deep in the midst of the Everclear Night,
When desire is strong and will is awakened,
May wishes be made and chances be taken.
— Ancient Lore, detailing the circumstances of the titular Everclear Night
Advertisement:

Paper Mario and the Everclear Night is an Interactive Comic by MSPA Forum-goer gestaltScribbler (referred to as gS). It is based on the Paper Mario series though as of the moment, neither Mario nor any of the other original characters seem to be the focus of the story. It focuses on the titular Everclear Comet, which passes by every five hundred years to those who wish hard enough. The format is based largely on reader input, much like the comic on which PM&ECN's home forum is based.

The thread has been continued from the first here

. Read the first thread before you check out the new one!