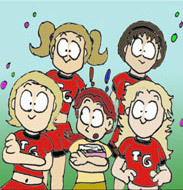 ) is a spinoff of The Wotch. It revolves around the misadventures of four cheerleaders (who used to be jerk jocks) at Tandy Gardens High School, which is a much stranger place than it seems.

Unfortunately, though, Word of Backup Host

is it's a Dead Fic. Most pages are posted there and on archive.org

with at least one exception

with the former (presumably accidental).