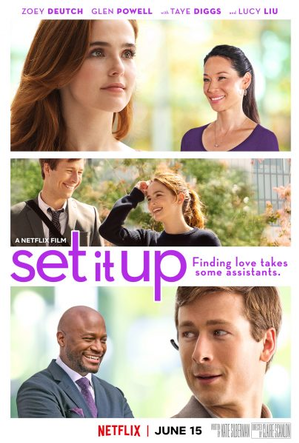 "We know everything about them. What they like, what they don't like. We control their entire schedule. We are the men behind the curtain. We can get them to do anything."
— Harper
Advertisement:

Harper (Deutch) and Charlie (Powell) are the respective Beleaguered Assistants to the stern, ambitious Kirsten (Liu), a prominent sports journalist, and the tyrannical Rick (Diggs), a venture capitalist. Since they know everything about their bosses' lives, Harper and Charlie scheme to get Kirsten and Rick together in the hopes that the newfound relationship will get their bosses off their backs. However, the plan doesn't go as either of them expect.

The film was released worldwide on Netflix on June 15, 2018.

Becca's boyfriend Mike is completely accepting of her promiscuity, to Harper's surprise.

Example of:
My Girl Is a Slut

Becca's boyfriend Mike is completely accepting of her promiscuity, to Harper's surprise.