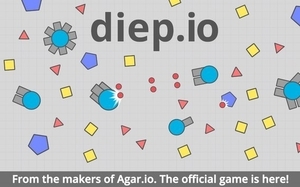 is a game made by the creators of Agar.io , released on 15th of April, 2016 about tanks fighting each other. It contains very strong RPG Elements , many different tank classes with many playstyles, and several modes including FFA, Survival, 2 teams, 4 teams, Domination, Tag, Maze, and Sandbox.

The aim of the game is simple: Top the scoreboard. To do this, you control a "tank" represented by simple shapes. You earn points by destroying the shapes that spawn all over the map (squares, triangles, and pentagons) or destroying other tanks. When you first start, you're effectively limited to shapes, as you lack the firepower and durability necessary to fight. Your only hope at this point if you run into an enemy is to flee, since tanks become slower as they level up unless they upgrade speed. After earning enough points, you'll go up a level, gaining an upgrade point to improve your stats. After enough levels, you'll be able to choose a new tank, with features like additional gun barrels or different bullet types. Eventually, you become strong enough to survive the crasher attacks in the "pentagon nest", where high value pentagons are common and even more valuable alpha pentagons can spawn, allowing you to level up more quickly. If you survive long enough, you will eventually reach the final level, 45, earning an end game tank and a last upgrade point. At this point, if you invested your points wisely, you are finally able to engage in combat with relative safety against anyone but other level 45s, though certain lower level tank builds may still be able to defeat you if you aren't careful.