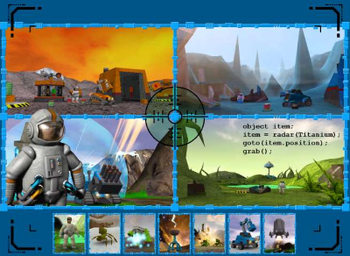 Colobot is a mixture of a Real-Time Strategy game and a Programming Game, released in 2001 by Epsitec. Your goal is to find a new Earth for humanity to colonize, with a selection of various types of robots at your disposal that you are able to program yourself. They use a programming language unique to the game, called CBOT, which is based on real programming languages like C++ and Java.

Since its original release, the game's source code has been released to the public, with TerranovaTeam actively working to this day on an Updated Re-release called Colobot: Gold Edition, which has various improvements not found in the original version. It can be downloaded for free from the official website