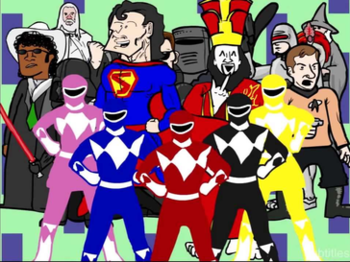 The song and video tell the story of dozens of (mostly 20th century) fictional characters, historical figures and celebrities duking it out. It starts with Batman trying to stop Godzilla from destroying Tokyo before both are stopped by Shaquille O'Neal, and just gets crazier from there.

The song and animation have examples of: