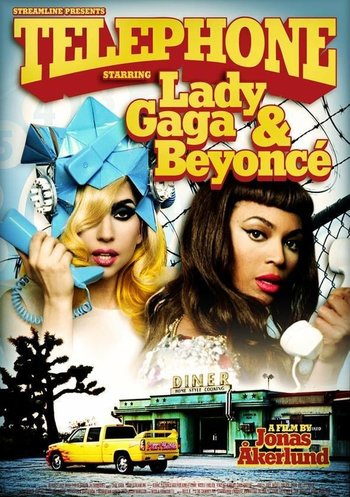 At the end of Paparazzi, Lady Gaga is being arrested for killing and admitting to killing her boyfriend after he pushed her off a balcony. The beginning of the video shows Lady Gaga in jail, and because it's a Lady Gaga video, no one really knows what is going on half the time, nor do we have even the slightest idea what on earth the video has to do with the song...

After the unnecessarily long intro, Lady Gaga answers the Telephone and proceeds to dance while in jail singing about not being able to answer the phone because she is too busy....doing absolutely nothing. Except for, y'know, singing and dancing in jail. While the man in charge of keeping the music playing is somewhere making a sandwich or something, Lady Gaga is let out of jail because someone put up bail money. And of course the guard is on a dating website because of course prison guards don't have anything better to do than go on dating websites.

The music man is still missing in action while Lady Gaga gets into a car with Beyonce of all people, who reprimands Gaga. And of course, Lady Gaga just makes a comparison between a mirror and trust (earning an odd look from Bee). At this point, the music man returns and Beyonce begins singing about someone repeatedly calling her and how she cannot answer. While the music man prances off to go get his sandwich, Beyonce proceeds to poison a man's coffee. In the kitchen, Lady Gaga has followed the music man, and she proceeds to assemble several poisonous sandwiches which they use to poison everyone in the dinner before driving off and dancing in weird costumes, the words "To Be Continued...."
So basically an ordinary Lady Gaga music video....