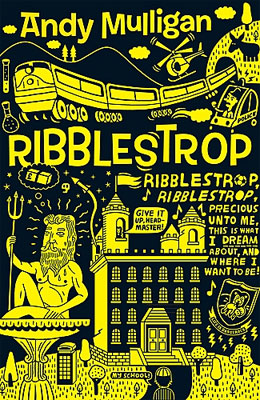 "Roofless dormitories, distracted teachers and a lethally dangerous underground labyrinth — Ribblestrop's visionary headmaster is out of his depth even before the pupils arrive! And when they do — what a bunch!"
Advertisement:

Ribblestrop is a children's novel written by Andy Mulligan.

Ribblestrop Academy is not for the faint of heart. This is a place with the motto "Life is Dangerous", where students smoke, drink, and use weapons — in defense of the school, and to keep themselves warm. The roof of the building is all but nonexistent, although to be fair, that's not exactly their fault; blame the arson attack last term. It also has an underground labyrinth, which beckons.

But don't think too hard on that. Although Ribblestrop has all the trappings of a thriller, it has an extremely healthy sense of humor and absurdity to boot, showing us that school isn't as sane as it first appears.

Has a sequel called Return to Ribblestrop. Thematically, the series is similar to Wayside School, but crazier.