The many shall suffer for the sins of the one... 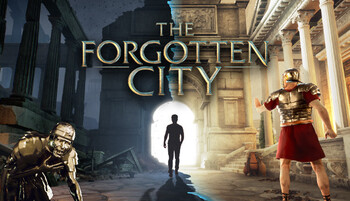 The Forgotten City refers to both a quest mod for The Elder Scrolls V: Skyrim that was released in October 2015, and a remake of the mod as standalone game that was released in July 2021. Both games have a similar premise; a woman asks you to investigate the ruins of an ancient city in order to find another explorer who ventured into the area but didn't return. You quickly find their remains inside, but visibly aged, and with a cryptic suicide note advising that they spent a lifetime trying to fix things, but without success.

Further investigation reveals a strange portal that takes you back in time to the city's heyday, whereupon the leader of the city advises you that the residents are unable to leave, and are subject to a strange curse which dictates that if one person sins, they all will be slain, and thus he seeks your help in finding a way to break this cycle and return you to your world...

open/close all folders
The Original Mod
The Standalone Game