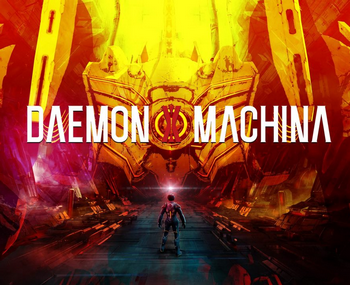 What resides within an Arsenal... A god or a demon?
Advertisement:

Daemon X Machina is an Action Mecha Game developed by Marvelous and First Studio (of Fate/Extella Link fame), self-published by Marvelous in Japan and published by Nintendo and XSEED Games in other regions. The game features mech designs by Shoji Kawamori, and is produced by Kenichiro Tsukuda of Armored Core fame.

In the distant future, a fragment of the Moon collides with planet Earth, killing millions of people and radiating Femto, a strange energy that poisons and corrupts anything it touches. In desperation, the surviving governments establish a quarantine area around the impact zone called the Oval Link and turn to A.I. programming to assist with the logistics of rebuilding civilization, creating a massive, advanced artifical intelligence to oversee the rebuild operations. Upon coming in contact with Femto, however, the intelligence goes haywire, changes its objective from helping humans to annihilating them, and creates a new faction of enemies led by massive robotic beings called Immortals, with the faction itself called the Arms of Immortals, or AI for short. The AI attack Humanity's sanctums from Femto contamination, putting humanity in peril once again.

The key to Humanity's survival comes from Femto itself, which is discovered to be a bountiful and advanced source of energy that allows for quick invention and application to combat the Immortals, most notably the development of "Arsenals," Mini-Mecha that can field a variety weapons to shoot, slash, zap, smash, and blow up anything that gets in their way. The Arsenals are piloted by Outers, humans who have received superhuman powers by coming into contact with Femto and are deadly in their hands, able to resist the Immortals' corrupting influence and bring the fight back to them. However, all Outers are indebted to Orbital, a massive organization that retains neutrality between the various human factions and controls the balance of power, and in order to pay off their debts, are employed as mercenaries to fight the Immortals with the hopes of reclaiming the Oval Link from them once and for all and restore the world to what it once was.

The player controls a newly-christened Outer, callsign "Rookie", and must fly through various city-scapes to accomplish missions, working with, and occasionally against, fellow mercenaries. Items can be acquired in the battlefield, either picking them up or taking them from fallen enemies. One notable feature is that the Outer themselves can be customized, via buying various cybernetic upgrades that can not only improve their own performance, but their Arsenal's at well, at the cost of drastically changing their appearance until they are literally more machine than human.

On September 2021, during the game's 2nd anniversary livestream, Tsukuda announced that a sequel is in the works.

Dr. Juvenile calls in a deus ex machina...or rather, a Daemon X Machina!

Dr. Juvenile calls in a deus ex machina...or rather, a Daemon X Machina!