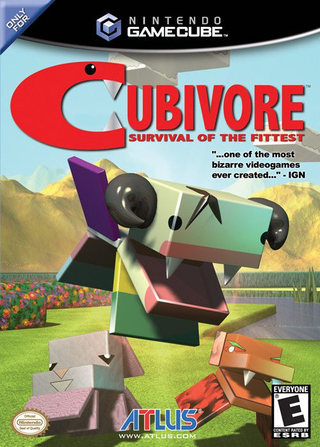 It's a block-eat-block world.
Advertisement:

Cubivore: Survival of the Fittest is a very odd game released for the Nintendo GameCube in 2002, where you play as an animal who eats other animals in a law-of-the-jungle world. The game was originally developed for the Nintendo 64 Disk Drive before shifting to the standard N64 and finally the GameCube, the reason for its low-res cubic art style (in fact, a leaked prototype of the N64 build is virtually identical to the GameCube release barring the console logo and controller buttons). A Cubivore is basically an animal head with strategically positioned flaps of limbs called meat stuck to either its body or other meat flaps.

You, a Cubivore, recall a past you never saw or heard but still remember in great detail.

Once upon a time, many colorful beasts called Cubivores lived and died, ate and were eaten all across the world, and the world was bursting with Wilderness.

However, a group of colorless beasts began to work in unison and devour the beasts, along with the wilderness, storing the wilderness in augmented limbs called Raw Meat, which gave them great power. The leader of these colorless beasts was called the Killer Cubivore, and had six pieces of Raw Meat. He set out to devour every bit of the world's wilderness and render the land lifeless.

Then, you're born, and you start to eat things.

The primary mechanic of the game involves collecting combinations of colors, which allow the player's Cubivore to mutate into different color-coded species with different abilities. These combinations start out as light or dark solid colors or mixed light and dark, but progress to "Rage" colors which require different mixing principles to form "Clash" species. The goal of the game is to obtain 100 different mutations and confront the Killer Cubivore to restore Wilderness and life to the world.

On the way, the player would battle the colorless beasts, who held the Wilderness in their Raw Meat. Devouring them allows the player to progress to the next area, and also allows them to mate, producing more powerful offspring with more limbs. Of course, the game started you off with one limb, then up to six.

The sister game to the popular Animal Crossing (which was also first developed for the 64DD, but actually saw a Japan-only release for the standard N64 before being ported to the GameCube), Cubivore never caught on like its counterpart. Plans for an official localization from Nintendo were dropped, leading Atlus to swoop in and localize it in their stead.