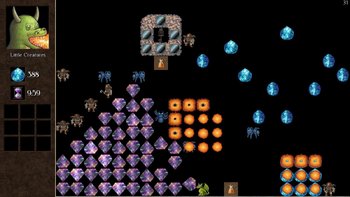 Everything's better with fire breathing!
Sub Terra Draconis is a puzzle game developed by Crystal Shard. It is the sequel to SubTerra.

Like in any Digging Game, the goal is to get gems and then reach the exit. The main character is a dragon, who aims to collect the biggest hoard ever, and who can breathe fire to scorch adjacent squares. The obstacles are grouped in an elemental theme. Unusual for a digging game, Sub Terra also includes elements from Chip's Challenge, ZZT, and Laser Light.

Contains tropes such as: