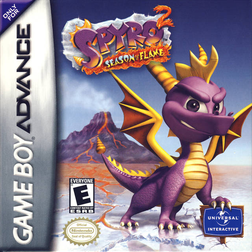 The fifth Spyro the Dragon game, developed by Digital Eclipse and released on the Game Boy Advance in 2002.
Advertisement:

Ripto has returned and is enacting a plan to have the rhynocs steal all the fireflies from the dragon realms, so the dragons will lose their ability to breathe fire. Aided by Sparx, Agent 9, and Sheila, and utilizing fire, ice, and lightning breath, Spyro sets out to save the fireflies and stop Ripto.

Not to be confused with Spyro 2: Ripto's Rage!. This game was given its number because it was the second to appear on the Game Boy Advance.