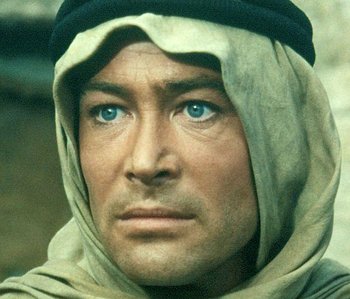 "Do you think I'm just anybody, Ali? Do you?"
Played By: Peter O'Toole
"My name is for my friends."
Sherif Ali 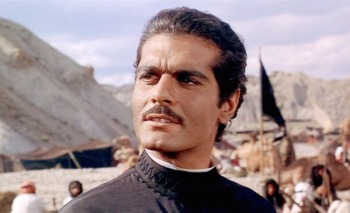 "Wadi Safra is another day's ride from here. You will not find it, and not finding it, you will die."
Played By: Omar Sharif
"Truly for some men, nothing is written unless they write it."
Advertisement:
Prince Faisal 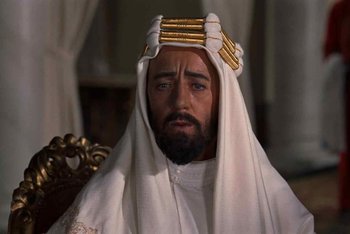 "There is nothing in the desert, and no man needs nothing."
Played By: Alec Guinness
"With Major Lawrence, mercy is a passion. With me, it is merely good manners. You may judge which motive is more reliable."
Auda Abu Tayi 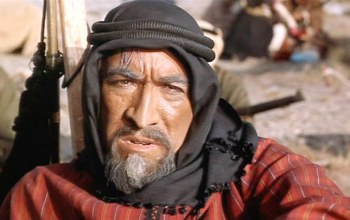 "Thy mother mated with a scorpion!"
Played By: Anthony Quinn
"It is well for I am an old dog and these are new tricks. But be warned, being an Arab will be thornier than you suppose, Harith!"
General Allenby 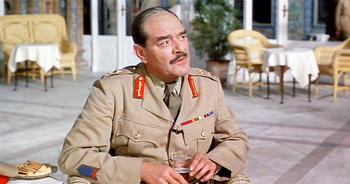 "You're an interesting man, there's no doubt about it. Who told you to take Aqaba?"
Played By: Jack Hawkins
"I've got my orders to obey, thank God. Not like that poor devil, he's riding the whirlwind."
Mr. Dryden 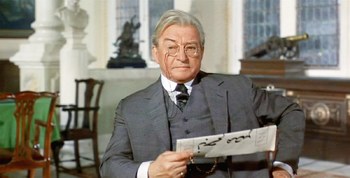 "It is recognized that you have a funny sense of fun."
Played By: Claude Rains
"Big things have small beginnings."
Colonel Harry Brighton 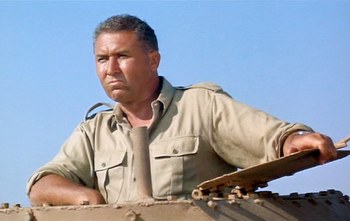 "He was the most extraordinary man I ever knew."
Played By: Anthony Quayle
"Look sir, we can’t just do nothing."
Advertisement:
The Turkish Bey 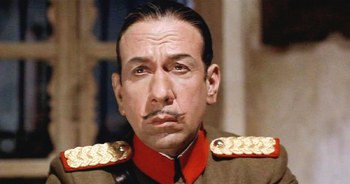 "Beat him!"
Played By: José Ferrer
"Two years I have been posted to Deraa. If I had been stationed on the dark side of the moon I could not have been more isolated."
Jackson Bentley 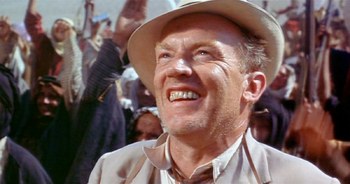 "This whole theater of operations is a sideshow!"
Played by: Donald Wolfit
"How can I fight a bloody war without bloody artillery?"
Gasim