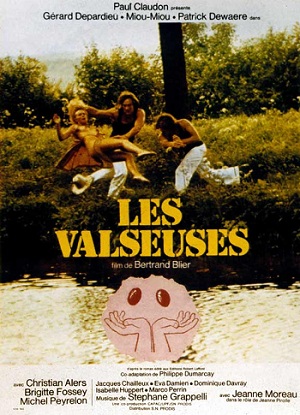 Les Valseuses (also known as Going Places in English-speaking countries) is a 1974 French comedy-drama directed by Bertrand Blier, adapted from Blier's own novel, and starring Gérard Depardieu, Patrick Dewaere, Jeanne Moreau, and Miou-Miou. Isabelle Huppert made her screen debut in it. The film's title is a colloquialism which roughly translates as balls. Because of its explicit sexual content, the film was first rated unsuitable for people under age 18. It was later downrated to 16. The film was a major breakthrough for its three main stars, Depardieu, Dewaere and Miou-Miou.

Jean-Claude (Depardieu) and Pierrot (Dewaere) are two whimsical, aimless young thugs. They harass and assault women, steal money and cars... and alternately charm, fight and sprint their way out of trouble. Marie-Ange (Miou-Miou), a jaded, passive and frigid hairdresser assistant, joins them as lover, cook and mother confessor. She's on her own search for seemingly unattainable sexual pleasure.

An American remake, titled The Jesus Rolls, directed by and starring John Turturro, was released in 2019. And it's a spinoff of The Big Lebowski. Make of that what you will.