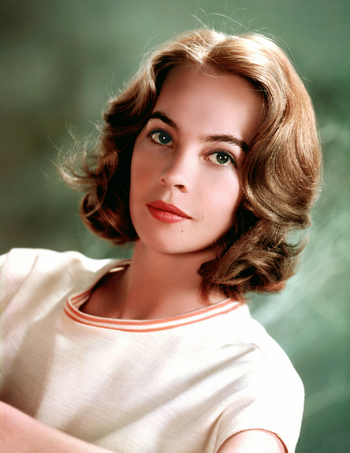 "I got what I have now through knowing the right time to tell terrible people when to go to hell."
Advertisement:

Born in the Paris suburb of Boulogne-Billancourt, Caron was working in a Paris ballet when Gene Kelly saw her, and wound up casting her as the female lead in An American in Paris. The film was a huge hit, winning the Academy Award for Best Picture, and Caron instantly became a movie star. Her dancing background prepared her for a series of hit musicals throughout the 1950s, culminating in 1958's Gigi, her second film to win Best Picture.

Caron enjoyed success into the 1960s, starring in the hit Fanny as well as the May half of a May–December Romance in Cary Grant's next-to-last film, Father Goose. Her affair with Warren Beatty led to a divorce and also led to them starring together in Promise Her Anything.

Her career as a leading lady gradually petered out in the 1970s but Caron has continued to work in film, stage, and television ever since.