Film / Battle of the Sexes 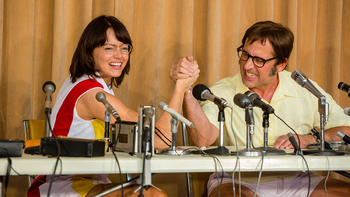 This wasn't it.
"He made a bet. She made history."
— The film's tagline
Advertisement:

Battle of the Sexes' is a 2017 biographical sports film based on the famous 1973 tennis match of the same name between Billie Jean King (Emma Stone) and Bobby Riggs (Steve Carell).

Battle of the Sexes contains examples of the following tropes: