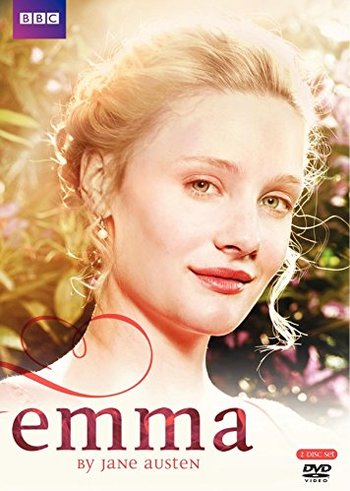 The BBC returned to Emma in 2009 after nearly four decades, scripted by Sandy Welch (though they had planned a follow-up to Pride And Prejudice in 1996, cancelled when the other two versions were announced - a project which was also supposed to be scripted by Sandy Welch). Starred Romola Garai as Emma, Jonny Lee Miller as Mr. Knightley, and Michael Gambon as Mr. Woodhouse.

The series is laid out in four episodes, and starts with the childhood fates of Emma Woodhouse, Frank Churchill, and Jane Fairfax after they suffer losses in their families.

One day, you will bitterly regret your tropewriting.

"...and I bitterly regret my tropewriting."