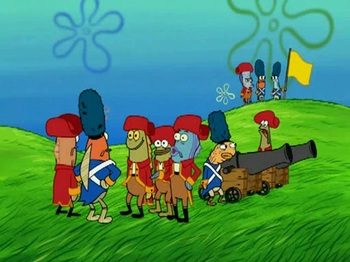 "They're trying to learn for free!"
Spongebob: Wow! I like that one. Hey, mister, where did you and your friends get your matching outfits?
Bill: Oh, no, these aren't my friends. In fact, I hate just about everyone here... but my love for historical battles is so great, I join these losers every year to re-enact the battle of Bikini Bottom.
— SpongeBob SquarePants, "The Battle of Bikini Bottom"
Advertisement:

A bunch of people simulating famous battles and wars, especially (if American) The American Civil War, (if English) the English Civil War, (if anything from French to Russian) The Napoleonic Wars and (if European) The Middle Ages, the Thirty Years' War or World War II. A character already known to be a history, military, or weapons geek will probably be in attendance. Sometimes they'll be the descendant of a famous general.

Given their place in the world of subcultures lies somewhere between Nerds and Geeks and socially acceptable study of history, their fictional depictions vary — from living history hobbyists and patriots, through enthusiastic but harmless geeks who just pay attention to actual history behind their SCA fantasies, all the way to obsessive types who behave as if they were Born in the Wrong Century.

In Real Life, there are some quirks to reenactment. For one, reenactors tend to be on average older and more well-fed than their historic counterparts. Many casual reenactors also tend to gravitate towards the "elite" or "badass" units leading to their over-representation, because when you want to play out your historical fantasies, you kind of need to grow to accept the fact that not everything worked like in the movies and that common footmen were actually more numerous than Viking jarls or knights in full plate (and for that matter — fantasy fiction, while a gateway drug, is not an accurate depiction either). And talking of elite formations, playing out "evil" formations such as the Waffen SS is a perennial source of controversy, even if a battle kind of requires the other side. And finally, putting together a cavalry unit is a whole degree of magnitude harder since you need reenactors who are also equestrians; many European reenactors scoff that of the whole lot of knight reenactors, just a merest handful of them can ride.

Still, it's worthy to note that many historical war films make use of reenactment societies as readily equipped extras, e. g. in Gettysburg and its prequel Gods and Generals. Making enough period accurate costume uniforms and prop weapons for a large group of extras is so ridiculously expensive that very few film productions even have a large enough budget to do one scene requiring a large group of extras that looks period accurate without using reenactors who brought their own costumes and weapons (some of which can cost as much as, if not more than a new car).

Compare and contrast Society for Creative Anachronism, LARP, and Renaissance Fair. These are pastimes that are superficially similar, but have a different image in public consciousness and are not always appealing to the same mindsets. Note however that both the perceived and actual overlap is heavily dependent on time period; medieval reenactors will be confused for larpers a lot more often than Second World War reenactors.

Frank Heffley, in an attempt to bond with his son Greg, takes him to one of his Civil War reenactments. Unfortunately, Greg ends up ruining it.

Frank Heffley, in an attempt to bond with his son Greg, takes him to one of his Civil War reenactments. Unfortunately, Greg ends up ruining it.