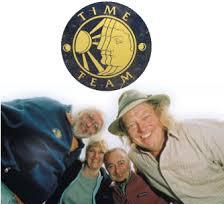 A regular lineup from the first 12 seasons: Mick, Carenza, Tony and Phil.
A popular TV series on archaeology, broadcast by Channel 4 in the UK from 1994 to 2013, and fronted by Tony Robinson (of Blackadder fame).
Advertisement:

In each episode, the Team have three days* (the length of a typical dig in the UK) to investigate a site not otherwise open for excavation, such as the grounds of private homes, farmland, a golf course, or occasionally within the bounds of major national landmarks like Westminster Abbey or Salisbury Cathedral.

The locations — usually in Britain — have generally never been explored with modern techniques, and often not at all, making this programme one of the few examples of genuine scientific research being televised. At some of the sites, Time Team made discoveries of national historical significance.

A typical episode would feature presenter Robinson and a team of archaeologists, usually led by Professor Mick Aston or Iron Age/Bronze Age specialist Francis Pryor and including field archaeologist Phil Harding and his team of diggers, congregating at the site and establishing to camera the key intentions and hopes for the next three days. Eras covered could range from Stone Age times to The Middle Ages to Victorian Britain to World War II.

With the aid of the likes of landscape investigator Stewart Ainsworth, archaeological geophysicist John Gater and a rotating cast of specialists and historians relevant to the era/area/type of finds expected, the Team endeavour to locate and excavate the best areas of the week's site and explain and extrapolate the significance of what they uncover. Discoveries would be brought back to life along the way by increasingly sophisticated computer graphics, but also, from the start, by the on-site artwork produced by speed-illustrator extraordinaire Victor Ambrus.

The success of the programme inspired multiple imitators, such as Meet the Ancestors and House Detectives. There have also been several Spin-Off programmes, and live episodes; in 2006, for example, they broadcast live coverage of the team digging up the gardens of Buckingham Palace.

The programme does not follow the normal tropes of TV fictional archaeology, but it does follow the standard structure, with a teaser and a cliffhanger question before each ad break.

Episodes of this show provide examples of: