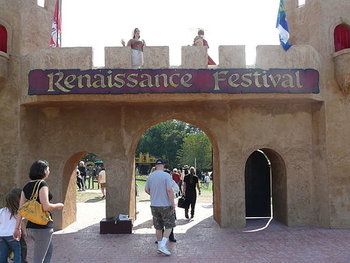 Want to put your characters in the Middle Ages but don't want to shoe horn the complications of time travel in? Then send them to the Renaissance Fair.

Ren faires (known by many other names) vary greatly in their oeuvre from one site to another, but in general they are The Theme Park Version of medieval and renaissance history, more concerned with putting on a show and selling turkey legs than presenting an accurate historical narrative, which is only fair as they are technically theme parks of a sort. They are often confused with, and can somewhat overlap with, historical reenactment sites, which do attempt to recreate and educate with regard to real history. Despite being named for The Renaissance, most faires borrow their visuals primarily from The High Middle Ages, as it bears such iconic features as castles, knights in shining armor, princesses in ridiculously fancy outfits, court jesters, etc. The actors may have a tendency to take their roles a bit too seriously, or not seriously enough. Some might decry that there's too much fantasy afoot while others will loathe that it's too filthy, some will be unamused at the lack of technology but others, be they geeky/nerdy, history buffs, or Mr. Imagination, might find it fun. A great excuse for the Classically Trained Extra to quote some Shakespeare if the need so arise.

Note: What most people think of when it comes to renaissance fairs is primarily an American thingnote In recent years, American-style Renaissance fairs have made inroads in other countries. Germany has seen a very similar phenomenon since the 1980s, and, beginning in the mid-1990s, Renaissance fairs have spread into Canada and Australia.. In Europe at least, stuff like historical fairs tend to be more like living history museums