Film / Muoi: The Legend of a Portrait 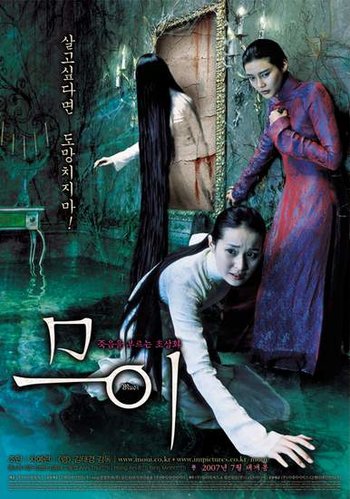 Muoi: The Legend of a Portrait is a 2007 Korean horror movie, set primarily in Vietnam. It was directed by Tae-kyeong Kim.

The film tells the story of Yun-hee, a writer from South Korea who travels to Vietnam in order to research a local legend for her next book. However, there is a slight problem: In order to research the legend, Yun-hee has to reunite with her old friend Seo-yeon. In her first book, Yun-hee based a character off of Seo-yeon, portraying her as a less than ideal character, based on rumors that had forced Seo-yeon to leave South Korea. Yun-hee fears that Seo-yeon would have read the book by now, and dreads their reunion.

Upon arriving in Vietnam, however, Seo-yeon doesn't seem to have read the book. The two reunite, and Seo-yeon helps Yun-hee research the legend of Muoi. According to the legend of the local village, Muoi was a woman who fell for a painter named Nguyen. However, Nguyen was engaged, and his jealous fiancee attacked and burned Muoi's face. In revenge, Muoi hung herself, becoming an angry ghost who terrorized the woman who hurt her, before eventually being sealed in Nguyen's painting by monks. However, the legend of her curse persisted throughout the village, and is said to occur every fifteenth day of the lunar month.

As Yun-hee begins to delve more into Muoi's legend, she begins to notice signs of the curse occuring around her. Even more alarming is how Seo-yeon seems to be up to something...